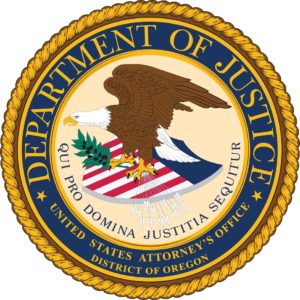 January 17, 2020 3:45 a.m.
A drunken assault at sea, has led to a federal prison sentence for a Winchester Bay man.
A release from the U.S. Attorney’s Office, District of Oregon, said that 39-year old Brandon Vanderploeg was sentenced Thursday to 18 months behind bars and two year of supervised parole for assaulting his then-girlfriend aboard a fishing vessel in August of 2018.
According to court documents, on August 16, 2018, members of the U.S. Coast Guard were dispatched to a situation at sea involving the report of a woman who had been assaulted by her boyfriend onboard a commercial fishing vessel. A Coast Guard helicopter located the vessel 17 nautical miles off the Oregon Coast. Two members of the Coast Guard boarded the vessel and made contact with Vanderploeg and the victim.
The release said the victim reported than man had assaulted her on several occasions since they had left Winchester Bay. She said that Vanderploeg had held her down, punched her repeatedly in the face, head-butted her in the nose, and slammed her head down on a tool box. The assault resulted in a three-inch laceration to her right cheek, a depressed nasal fracture, multiple contusions to her knees and arms, and a cervical strain.
During the investigation, the crew that boarded and conducted a sweep of the vessel, immediately noted a strong smell of alcohol coming from the man, who admitted to drinking. Vanderploeg tested positive for alcohol, registering a blood alcohol concentration of .183. An individual operating a commercial vessel is considered intoxicated with a BAC of .04 or more.
On September 30, 2019 Vanderploeg pleaded guilty to assault within the maritime jurisdiction of the U.S. and operating a commercial vessel under the influence of alcohol.
As part of a plea agreement, Vanderploeg agreed to pay restitution in full to his victim as ordered by the court. A restitution hearing will be held at a later date.
The case was investigated by the U.S. Coast Guard Investigative Service, and prosecuted by Garvin W. Bruce, Assistant U.S. Attorney for the District of Oregon.