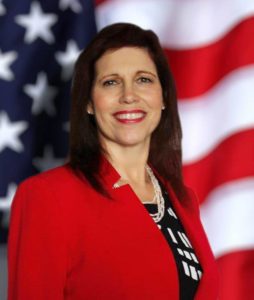 January 22, 2020 9:45 a.m.
Republican Jo Rae Perkins has filed to run for the Republican nomination for the U.S. Senate.
A release from Perkins said she had originally filed for the 4th District U.S. House of Representatives seat currently held by Congressman Peter DeFazio. Perkins said after watching Senator Jeff Merkley focused on the “sham impeachment trials”, she knew it was time for a change. Perkins said Oregon should have a “senator that cared about the state, not political games”. She believes she is the strongest candidate to “take him on and win”. Perkins said she reached her final decision “after receiving tremendous support and encouragement from Republican activists and Oregonians in her community and around the state”.
Perkins release said “while Oregon families are expressing their frustration with job-killing regulations, the price of prescription drugs, radical policies like the Green New Deal, and nationally security, Jeff Merkley has been more focused on impeaching the president and political games irrelevant to Oregonians”. Perkins said she is excited to get in the race and confident that she will win.
Perkins has a background in financial services, real estate, banking, education and small business. She is an elected precinct person for the Linn County Republican Party and served as the county GOP chairwoman for two years. She was a candidate for Congress in 2018 but lost the race in the GOP primary.
Perkins filed for the GOP nomination for U.S. Senate January 17th.